“If I have the Gain control turned all the way down, how can the mic pre still be peaking? If I engage the Pad button, will this change the sound?” 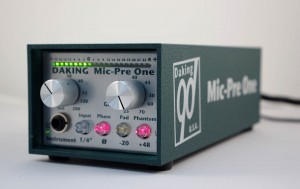 The Mic Pre One by Daking Audio

The “Gain” control is not a volume pot. It will not shut off the signal. It controls the amount of gain the mic pre can produce. The minimum gain is about 25 db, (or 5db with the pad in) and the maximum is >70db (about 10 dB more than most pre-amps.)

All microphones have different output levels. Ribbons generally have the lowest outputs while condensers have the highest. Dynamics are somewhere in the middle.

If you mic a guitar amp with an RCA 44 (the premier ribbon mic), you will probably need to add gain. If you use a Neuman U87, you will need the pad. That’s why condenser microphones usually have pads built in.

How to Use the Pad Control

Some people believe that the pad changes the sound. Not really true. Most good preamps have an input impedance of 1200Ω. This is the “load” or “termination” that the microphone is looking for. The frequency response of a mic is frequently affected by the load so they are optimized for this standard reflected impedance. In many mic pres, the reflected impedance changes when the pad is inserted, so the mic behaves differently when padded. We are very careful to see that this does not happen with our pres, the impedance does not change.

Do Not Fear the Pad.